GIRLS TO THE FRONT: AN INTERVIEW WITH DANIELLE MOHR OF HONEYWHAT 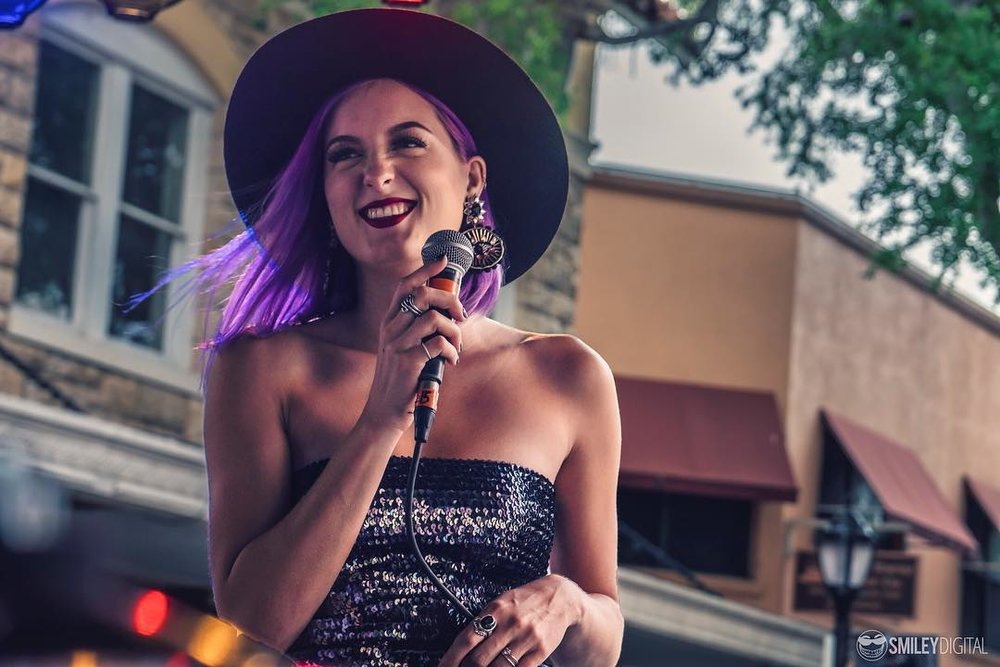 All through the month of March, Indie Jones is celebrating National Women’s History Month with our local women in music. In our “Girls to the Front” series, we ask local female musicians about what inspires them to contribute to our live music scene in the Bradenton + SRQ area.

This week, we are spotlighting Danielle Mohr. She has performed all over as a singer-songwriter act and currently fronts the soul/pop/rock bay area band HoneyWhat. Indie Jones spent some time with Danielle after her solo gig at Armature Works in Tampa to talk about her band, her inspirations, and how she gets her work out in. Check out HoneyWhat on May 25th in Sarasota for SRQ Margarita Festival!

IJ: How are you, Miss Danielle? First off thank you so much for interviewing with me. Can you tell me a little about HoneyWhat and how you guys got together?

I’m doing so great! Today was a lot of fun. So, I have a band called HoneyWhat that I am the frontwoman of, and we formed back in August 2017. We’ve played together for a little while now it in different capacities. I’ve had member switch over the years.

Are you guys working on any music to release soon?

At the beginning of the year, we had a meeting to talk about starting to work towards doing a studio recorded album. We have a pretty good collection of original music, so we are definitely working towards doing that. We did just release a live album in October 2018, so next up is studio!

Who does most of the songwriting?

As far as lyrics go it’s me. I have a lot of thoughts. I started playing guitar when I was 13. I’m 24 now, and I think I had my first official music gig when I was 17 or 18? Now, I’ve been doing music full-time probably for four years. Before I had the band, I was doing solo stuff and writing songs. That’s how I came out with my first EP. The reason I got the group together was to accompany me for my first CD release show in August 2017. So, I do the songwriting, and the band will come to me sometimes with instrumental parts or I’ll, like, secretly record them when they’re jamming before shows and that’s inspired a couple of songs on the live album. The writing is really becoming more of a group thing, and it’s beautiful. That was one of the things I was looking forward to with us getting the band together was having more creative energy and musicians to bounce ideas off of and evolve stuff with.

What other artist or musical acts really inspired your work?

If I ever want to feel inspired, I will listen to the Doors. Right now, I’m actually listening through Led Zeppelin’s discography – chronologically. It’s getting kind of crazy though cause I’ve gone past Zepplin’s I-IV, so that’s taking a while. Initially, when I started writing songs, I would listen to singer-songwriters like Sara Bareilles and Ingrid Michaelson, so I’m finding myself trying to gravitate back towards singer-songwriters. I look to artists like Lianne Le Havas and Corinne Bailey Rae. I really like their newest releases they’ve put out.

What do you think about the Florida music scene general?

I think it’s pretty cool. I’ve been able to go outside of the bay area a little more with the band on a tour of sorts. We have some shows coming up in Jacksonville and Orlando. I’ve lived in Florida all my life. There are so many good music hotspots here in our state. St. Petersburg is so relevant to me because they have such a great music and arts scene. I love it there, and I’ve found a lot of other awesome bands through playing shows there and in other cities in Florida. I’m actually really excited because my band is on the Orange Blossom Jamboree lineup this year in May. OBJ is a Florida exclusive festival but really just showcases Florida bands, so that’s really cool to be able to be a part of that.

Tell me about your favorite kinds of venues to play.

It kind of differs, and it’s really on either end of the spectrum. I like the really dirty dive bars, especially for my solo stuff. I also really love playing festivals and showcase events where you can really work with the energy of the crowd and just lay on the entertainment thick. I really try to find something to take away from each venue I play through – whether it’s a cover gig or a showcase gig.

What exactly is it that motivates your music?

I’ve been doing music full-time professionally for like four or five years, so there is some monetary motivation in there at this point. When I first started, and I was living with my mom and dad, I didn’t have a care in the world. I just really liked writing a song and playing it. The first time someone reacted to it is said, “Oh, that was really good!” I really connected with that song and was like “This is cool.” I didn’t expect that because when you write a song that comes from personal experience and you’re all tender about it. Seeing someone connect to it made me realize I could relate to even more people through my music. I just feel like watching my music move people to dance, or smile, or cry, or clap, or whatever brings me so much happiness. I love that connection.

You are my final interview for celebrating Women in Music this month. Do you think that being a woman in your industry alters your experience at all?

I think it does. At any gig or show where I am carrying something, I’ve had people physically try to, like, rip speakers out of my hand. They’ll say, “Oh no, you shouldn’t be carrying that!” and I’m like,” Excuse me. First of all, I didn’t ask for your help or critique. Second of all, this is like my gym membership it, and it’s free so don’t take that away for me please!” I do this for a living – you don’t need to worry about me being able to do the heavy lifting. On the business side of things, I haven’t really run into issues like I’ve heard some other girls have, thankfully. I keep things professional because I have a task at hand, so I get things done that I need to get done. I feel like what I have to deal with is what any woman in any profession has to deal with – Creeps at the bar, stuff like that.

Do you have any like women based artists that really speak to you?

I was a hermit for a long while I just recently I started to going out into the scene more – especially since I got the band together. I really love people like Ella Jet. I have a whole group of girls that do the same thing I do with the full-time solo gigging like Taylor Reed, Mallory Moyer, the list goes on and on. I love my ladies.

What can your community do to really help your artwork?

Catch Danielle Mohr of HoneyWhat on May 25th at the SRQ Margarita Festival!