GIRLS TO THE FRONT: AN INTERVIEW WITH TIFFANY BEYER OF TRAILER PARK MARK AND THE CRYSTALDETH BAND 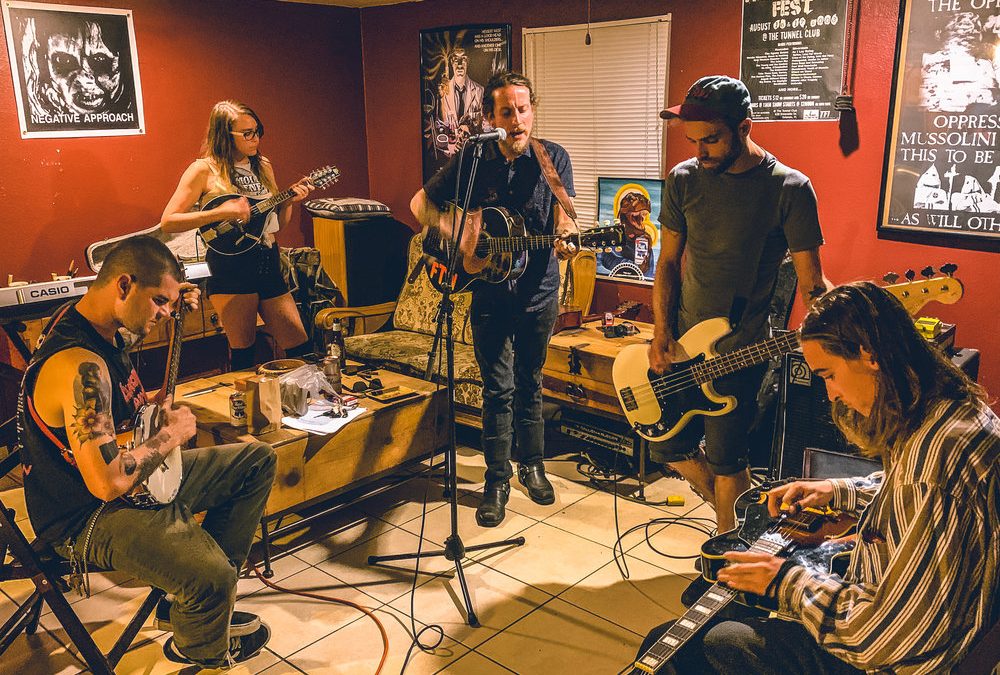 All through the month of March, Indie Jones is celebrating National Women’s History Month with our local women in music. In our “Girls to the Front” series, we ask local female musicians about what inspires them to contribute to our live music scene in the Bradenton + SRQ area.

This week, we are spotlighting Tiffany Beyer. Tiffany plays both the mandolin and piano in the post-punk/alternative country band Trailer Park Mark and The Crystal Deth Band. We here at Indie Jones got a chance to catch up with her after a recent practice.

IJ: I’m here Tiffany Beyer from Trailer Park Mark and the CrystalDeth Band. So, how was practice tonight?

Tiffany: Pretty good. We were missing a member tonight, but that’s okay. Practice is kind of at the point where we just run through all of our songs, and we have a couple of new ones we are working on.

For sure, that’s the point of practice.

This whole thing started with me and Mark playing around the campfire in this backyard right here. So he and I play a lot together, and we’ll bring it to the band and go from there.

And what do you play in the band?

I play mandolin and a little piano. At first, I only had one song that I played piano on, but I think moving forward I might play it on a couple of others. I think when we record, Mark wants piano on every song and I’m down with that. That’s my first instrument. I started playing piano in elementary school, and then I got a guitar when I was like 12 or 13. I got my mandolin about 7 years ago but really only started playing consistently a few years ago with my other band, Two Dollar Pistol.

You know I don’t know. I played Ukulele in high school, and then I got gifted a mandolin. Once you know a string instrument, you can kind of figure out the others. Actually, the piano being my first instrument taught me music theory a lot. Most things I can pick up and figure out because of that.

Wow, being able to play multiple instruments is a surefire sign of your love for music. What kind of music acts do you think inspired your band?

For me personally, it’s a lot of the bands that play Muddy Roots in Nashville and the Westport Roots Festival in Kansas City, M.O. There’s lots of Alt-Country, Outlaw Country, and Folk influence rooted in our music. Even some Indie and acoustic stuff, all the way to punk and metal because we all grew up listening to it and playing it.

What do you think about the Florida music scene currently?

Honestly, it makes me a little sad because when I first got into the Roots scene, I was living with Kate O’Shea who runs Root Cellar Entertainment. I lived with her for a year, and that’s when she was booking at Past Times every weekend [a former local venue]. All those bands used to come to play every weekend, and we were all pals and used to hang out and be friends, and that was such a different time compared to now. It’s a struggle to find anything going on especially out here in this area. Sarasota Sky is the only venue even close to doing anything that’s kind of relative to what we’re trying to do.

Why do you think that is?

It’s just a different environment that doesn’t really cater to any kind of music that’s isn’t gonna bring in like a ton of money. It’s not always about what’s good, it’s about what pays.

Which is so funny to me, because I see so many people that are in my orbit that are making music that’s considered alternative music and it just seems like there can’t be as many people playing it and not a big enough draw for it, too.

Lack of venues is a big factor. There’s also a lack of bands being able to find professional support instead of just making a Facebook event and hoping it works out.

Well, that’s what we at Indie Jones are working at. If you could play your perfect venue, what would that look like?

If we could go back in time and play Past Times in like 2012 that would be my dream show.

Do you have any hobbies or passions outside of your music?

Right now so much of my focus is on music, but I just graduated in December with my Bachelor’s in Journalism. That was a lot of hard work, and I think I just want to chill and take a break. I love writing, photography, videography – all that. I’ve always been an artist, but music is it the one thing that really gets me going right now. It’s so nice to have met my band and I kind of just fell into this group of friends that I cherish. They are into it as much as I am and they take it seriously. It means a lot.

Tell me what it’s like for you to be a woman in music.

Going into it I kind of knew what to expect. I’ve been friends with a lot of musicians my whole life and around a lot of women musicians, so I’ve always heard the stories. When I was in Two Dollar Pistol there were many times at shows that were like that Hardtimes Article, “Man Offers to Introduce Woman to Band She’s Already In.” Like, that’s real life, dude. Another time, we played a radio show in Miami, and the host asked me if me and my bandmate Jimmy were dating, because it stumped him that you could be a girl in the band and not be dating one of the guys in your band, too. He videoed us playing and cut me out of the whole video. That whole experience could have been so cool – and it was really cool still – but after that when we left, I was just thinking, “That was so dumb.” I was upset…I’m a human, I’m doing my thing just like everyone else, why am I being treated any differently? It’s something that exists, and maybe it will get better. Thankfully, the bands I have been in have really supportive men that will stand up for me. They shouldn’t have to, but they will.

Yeah, they are allies.

Do you see any shift in the tides as far as being a woman in the music scene?

I feel like it’s getting there. We are working on it. There are a lot of people in the scene that are supportive and go out of their way to make sure everything is being done the way it’s supposed to be done. Guys that are in a band with women usually keep it in the back of their mind that something could happen, so we all look out for each other.

What other woman musicians really inspire you?

One that stands out for sure is Molly Gene. Her project “Molly Gene – One Whoaman Band” is incredible. She plays guitar and has one of those professionally made foot drums. Her music is really heavy Delta blues, and she’s just such a badass.

What can the community do to support you and your artwork?

Come out to shows! You can’t just put “interested” on Facebook – you have to come out. I know we all have lives and jobs but if this is something you really love, and you want to be a part of, show some support and come out. Even if you have to work the next morning, so do I, and I’ll still be there all night making music. Just show up for a beer and to say hi!