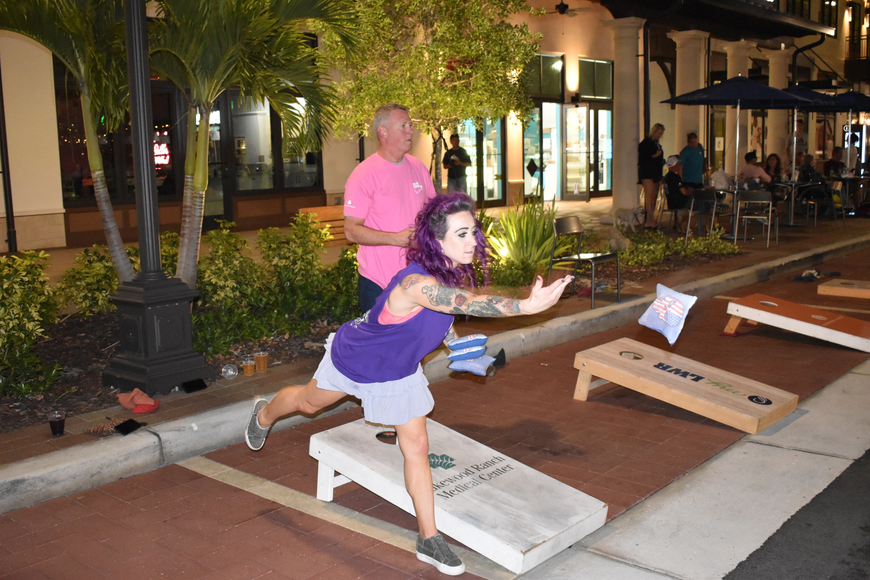 Her husband, James, would play in MVP Sports and Social’s cornhole league, and she and her children, 13-year-old Jack, 12-year-old Maddie and 9-year-old Finley, would peruse the various food trucks available, spend time with friends and listen to the live music.

“It’s a fun night,” Mary Buck said. “It’s something to look forward to in the middle of the week and a fun palace to meet up with friends.”

Ranch Nite Wednesdays is returning to Waterside Place of Lakewood Ranch on Oct. 5, a month earlier than previous years.

“I’m looking forward to having a space for everyone in the community to gather,” Hackel said. “I had a lot of fun last season grabbing food with family and friends.”

Hackel said last season, about 4,500 people were attending Ranch Nite Wednesdays each week, but she thinks the number of attendees will increase to about 6,000 people weekly this season.

Like past markets, food and dessert trucks will line the street offering a variety of food, while live music is performed by local musicians.

New to Ranch Nites this year are two Cornerstone and Company’s vintage mobile bars that will serve craft beers, wine and specialty cocktails.

“We previously had restaurants serving and found it was tough to serve the crowd we were getting,” Hackel said. “We are expecting a bigger crowd this year given we have more cornhole teams and have the night market every week.”

The night market, which includes about 35 vendors selling a variety of products, will now be at Ranch Nite Wednesdays weekly rather than once per month. The vendors, which are local, small businesses, will rotate weekly.

Morgan Bettes, the CEO of Independent Jones, said the night market will be different from Sundays’ Lakewood Ranch Farmers Market in terms of what vendors will be selling and the flexibility vendors have in participating.

“We’re trying to get in as many businesses as possible this season and give those businesses a few times to participate while still giving the customers that variety,” Bettes said.

Both Hackel and Bettes said the night market will give people an opportunity to learn about and discover small businesses in the area.

“I love it because I can find unique things I can’t find elsewhere and support local, small businesses,” Buck said. “There’s a candy vendor my kids really love. There are several really beautiful jewelry artisans. There’s a pair of earrings that I didn’t actually buy, and I hope they come back because I regret not buying them.”

Bettes said vendors will sell a variety of products from clothing and apparel to jewelry, candles, soap, holiday trinkets and more.

On top of the food and dessert trucks, live music and the night market, Ranch Nite Wednesdays has MVP Sports and Social’s cornhole league. This year, 114 teams are participating, which is the most in the organization’s history. The league is the biggest cornhole league in the country.

Read the full article on The East County Observer.